Celebrating Pride & Giving Back to the Community

Happy Pride!!!! Can you believe it’s June already! What even is time? It’s almost officially summer and I’m doing so much these days!

Over the past month I’ve teamed up with Devin Ibanez, the first openly gay US Major League Rugby Player (and fellow Puerto Rican), and together we have been raising money in support of The Transgender Law Center.

Transgender Law Center (TLC) is the largest national trans-led organization advocating for a world in which all people are free to define themselves and their futures. Grounded in legal expertise and committed to racial justice, TLC employs a variety of community-driven strategies to keep transgender and gender nonconforming people alive, thriving, and fighting for liberation. (pulled from their website)

Our initial goal was to raise $5000 over the span of about four weeks but our donors rocked it out and we hit that goal in two weeks. So we decided to push the goal to $7500 and we hit that one too! Now that the fundraiser is over we have raised a total of $8000!!!

We’re in the wrap-up phase of the fundraiser and we couldn’t be happier with the response.

I would like to give a special thank you to Devin Ibanes (@thatgayrugger) for all his hard work and dedication. We didn’t know each other before this fundraiser. He’d liked some of my art online and when I saw that he was doing a fundraiser for Trans Youth I asked if I could help. Just like that, we were in this together. From creating fliers, sending countless emails, scheduling phone calls with TLC and each other all across time zones and our super busy schedules we did the work and I feel like I made a friend in the process. So thank you Devin for the great teamwork and for your tireless outreach efforts. You really rocked it and I’m so happy we did this. 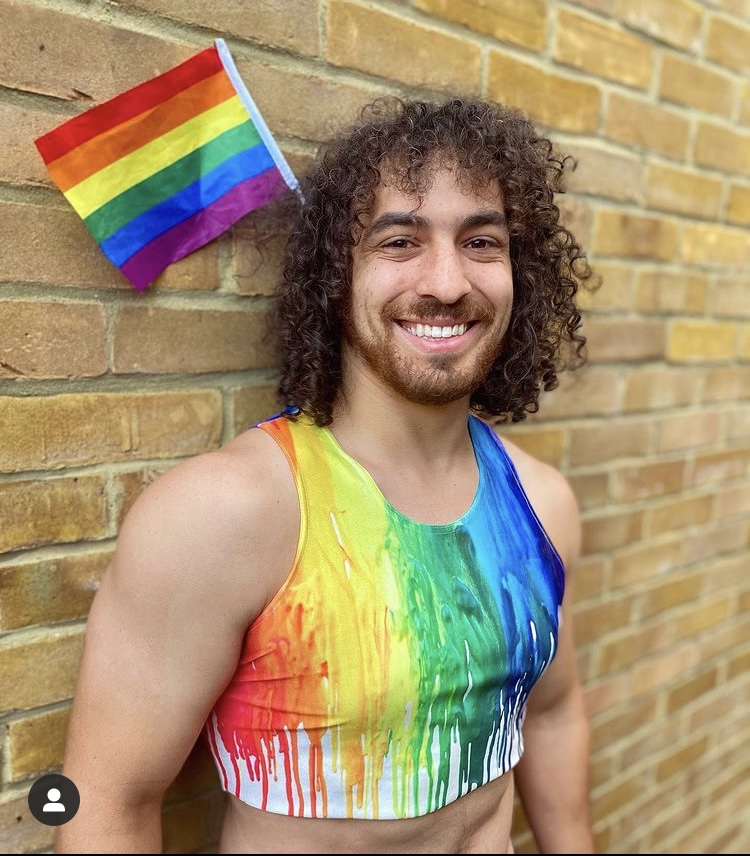 As a gift to our donors, I created a digital painting to be sent to anyone who donated over $50 and we were pleasantly surprised that so many people donated that amount!

The piece I illustrated is of a rugby team proudly dressed in the trans pride colors, lifting each other up mid play. They are united with a purpose, a goal. They rely on each other to fill in the gaps, to be there when they make the pass or get knocked down. As a member of the LGBTQIA community and an ally of trans identified people I proudly stand united with the Trans community and the Transgender Law Center’s mission. We are in this fight together, one team standing strong, holding each other up. I hope this piece captures the spirit of our collective strength.

The past year has been a difficult one. We have recognized and called out the various injustices that have plagued our nation and we can not close that curtain, it’s already been pulled back.

And as we have witnessed, there are systems of power that seek to target groups they believe are too small or too powerless to spark a costly political backlash. But they are wrong. We have never been powerless and we will persevere.

As an artist I don’t believe the themes of art always have to be political. However, the simple act of making art as a gay latine person in the US is a political statement. My point of view, my values, they matter and should be acknowledged and heard. I plan to continue using my art to create beauty in the world but also to call out injustices and support the causes I feel align with my values. That’s what Brujology stands for, “Handmade Alchemy” is my new tagline because the act of making is a form of a magic and that magic is spun from the hands of this proudly Gay Puerto Rican.

And after reflecting on all of that, remember that your JOY is invaluable. It is the ultimate goal and the purest form of magic.

Laugh and smile and rejoice but above all, love one another.

Big Moves in 2020: Moving to Philadelphia during Covid

Smiling at the Possibilities: the Brujologie Shop is now Open

So proud of my student @lizzy.heezey for stitching

2022 will be the year of texture and experimentati

Things can get messy real quick in here. New work

I just popped onto the @marshfieldschoolofweaving

I had the pleasure of making this #PassionFlower a

A new year and new projects! Now that the holiday

Weaving an easy tiny piece today to keep my hands

Just a work in progress pic. Was feeling under the

Made these fun tropical fruit pattern prints while

This Saturday the 18th I will be vending at TWO ho

This Saturday! At Fleisher Art Memorial, I will be

I met some really cool people at yesterday’s hol

This one is ready for framing. Couching stitch on

Here’s a little sampling of some of my new print

I did a lot of little experimentations from this o

Thank you @thegentleartinc for send me these beaut